ISABELLE AND THE PRETTY-UGLY SPELL

Isabelle And The Pretty-Ugly Spell is an original family musical about Isabelle, a lovable, though scatterbrained fairy godmother who goofs while casting a spell to help a princess find true love, and now has only three days to make things right. Isabelle’s clock-ticking, cliff-hanging, nail-biting journey leads the audience through hilarious high jinx to a happy ending to underscore the lesson that looks don’t matter — it’s what’s on the inside that counts. With a cast of seven who do double and triple duty, hummable songs, quirky characters and an endearing story, the musical is ideal family entertainment for “children of all ages.”

In the prologue Isabelle (affectionately known as Izzy) discovers that the new-born Princess just assigned to her from Kingdom 33 West is the most beautiful princess ever to live. Fearing that when she comes of age, suitors will want to marry her only for her looks, Izzy casts “The Pretty-Ugly Spell” over the entire kingdom. Though the Princess will remain fair of face, everyone will see horns, warts and scales of green. Only a kiss of true love can break the spell.

Almost sixteen years later it is another Assignment Day in Fairyland, Izzy’s favorite day of the year. But an angry Grand Fairy announces that Izzy will not be getting a new assignment because her princess in Kingdom 33 West has not yet received her kiss of true love, and if she doesn’t receive it within three days — by her sixteenth birthday —the spell can never be broken. Long ago Izzy had missed the fine print in her spell book — a mistake, coupled with so many others, now will have its consequences. Grand Fairy takes away Izzy’s wand and puts her on probation. She will get her wand back only if she finds a boy to kiss the Princess in time to break the spell.

Izzy’s quest begins. Frantic but determined, she goes down to Kingdom 33 West and heads for the castle to find the Royal Book of Bachelors. Inadvertently, she is hired as the Royal Housekeeper, finds the book, reveals herself to the Princess, and promises to help her find true love. Meanwhile, the King has planned a ball for the Princess’ sixteenth birthday to find her a husband. But since no one wants to attend for fear of being hitched to the ugly Princess, the King makes a decree that all eligible bachelors must attend or be beheaded. In the town square Izzy meets an awkward boy named Clyde who wants nothing more than to become the Royal Inventor, but when Izzy tries to follow Clyde home to pursue him for the Princess, she gets lost and returns to the castle empty-handed. At the castle Izzy commiserates with the King about the difficulties of a single parent in raising a daughter. (The Queen had passed away after the birth of the Princess and the King is raising her alone.)

Clyde’s two nasty stepbrothers, Cornelius and Radbourn, have read the King’s decree and whine to their tyrannical mother that they may get stuck with the Princess at the ball. Delighted, Stepmother reveals her plan: one of them will marry the Princess, wait for the King to die, then take over the kingdom for themselves.

With only one day left before the ball, Grand Fairy discovers that Izzy hasn’t yet found a match for the Princess and comes down to the kingdom to prod Izzy along. Izzy persuades her boss to use her wand to whisk her to Clyde’s basement workshop where she finds the amateur inventor busy at work. She learns that Clyde won’t go to the ball not for fear of being stuck with the ugly Princess or being beheaded, but because he can’t dance. Izzy instills in him confidence by teaching him to dance and putting on him his own invention intended for the King--a pair of spectacles. Clyde discovers he isn’t clumsy, just blind as a bat. He agrees to attend the ball, hoping to present the spectacles to the King and even meet the Princess.

At the ball the King is less than pleased to learn that only two bachelors are in attendance: Cornelius and Radbourn. But just before midnight, Clyde arrives, and it is love at first sight. At the stroke of midnight, he finally bestows a kiss of true love, but is chased away by his furious Stepmother and two stepbrothers before he can see that “The Pretty-Ugly Spell” has been broken. The others stand in awe of a most beautiful though tearful Princess, who picks up the spectacles dropped by her mysterious suitor.

News of the Princess’ beauty spreads far and wide and princes line up to marry her. But the Princess insists on waiting for her own true love to be found. In the eleventh hour, with Izzy’s help, the royal family discovers Clyde tied up in his workshop. But he denies ever having met the beautiful Princess, insisting that the girl he fell in love with at the ball had horns and warts and scales of green. Luckily, a kiss by the Princess jars his memory.

A royal wedding is held. A contrite Grand Fairy shows up with Izzy’s wand, but Izzy declines to take it back, knowing she can be a fairy godmother without it. The King appoints Clyde the Royal Inventor and Izzy, the Royal Matchmaker, and all live happily ever after. 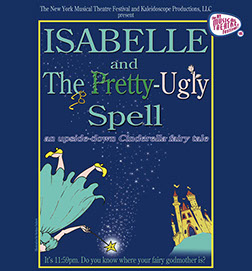 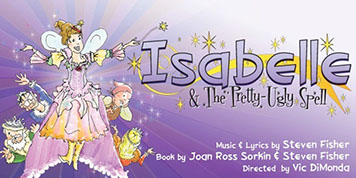 “…a nearly perfect pastry of a show.”

with some dozen songs, matches the book by Fisher and Joan Ross Sorkin.”

“…that rare achievement, matched only by the likes of Shrek or Aladdin.”

“Steven Fisher’s music and lyrics are “accomplished” and “endlessly inventive.”

to make the grade-school groundlings giggle.”

“Isabelle and The Pretty-Ugly Spell, by Steven Fisher and Joan Ross Sorkin,

is a pleaser… a delightful mix of ‘Sleeping Beauty’ and ‘Cinderella.’”