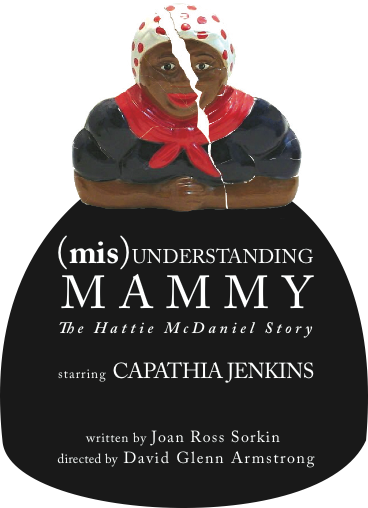 (mis)UNDERSTANDING MAMMY, a one-woman play with music, is a story of race in America, examined through the lens of Hattie McDaniel’s remarkable life. Hattie achieved stardom by becoming the first African-American to win an Academy Award, but she paid a high price for fame. By playing a succession of maids and cooks, most notably Mammy in “Gone With The Wind,” she became the target of an unrelenting “campaign against Mammyism" led by Walter White of the NAACP who thought her roles were stereotypical and degrading to their race. Despite her own efforts to bring dignity and humanity to her characters, within seven years of winning her Oscar, her film career was virtually destroyed by White and his campaign that not only attacked her personally, but also championed light-skinned blacks at her expense and the handful of other successful dark-skinned blacks in Hollywood.

Set in 1952 at the Motion Picture Country Home and Hospital in Woodland Hills, California, the play begins as Hattie is dying of breast cancer. Hallucinating in her hospital room, Hattie believes Walter White has come to reconcile their differences, and in order to prove to him that she was indeed a credit to her race, she reminds him of the major events of her life and her many “firsts,” large and small from her early days in Denver as a singer/dancer/actress in vaudeville and on the radio, to nightclub celebrity in Milwaukee, then to ground-breaking Hollywood icon, and finally to the downfall of her career. As she traces her life from a happy, optimistic girl to a proud but embittered woman, her battle against racism in Hollywood in the '30s and '40s is revealed. Yet throughout Hattie’s roller coaster ride, she sings and dances, cracks jokes, and recites the lines that made her famous, illuminating a life so often misunderstood.

“McDaniel's remarkable life, career and controversy are examined in

The script is impressively worthy of its material, and manages to avoid the traps that so

often plague one-person shows. Even more impressive is how the play manages to be fresh, vibrant and vital…It might easily have fallen from drama to lecture, but Sorkin's script is rife with conflict, and her McDaniel,

as portrayed by star-in-the-making Capathia Jenkins is intense and passionate.

Jenkins is a veritable volcano of energy. And when she explodes,

raging like Lear on the heath, she perfectly punctuates each emotional moment,

setting us up for the next stretch of the roller-coaster ride…a tour-de-force performance.”

people were rising to their feet to applaud her compassionate and lovable portrayal. Jenkins'

performance conveys a wonderful humility and strength.  She is powerful, sincere and instantly likable.

Sorkin's script accomplishes the remarkable feat of conveying history without being didactic.

The story remains interesting throughout, and Sorkin peppers the reminiscences with little jokes here

and there to keep things from getting too heavy, in what is of course a serious situation.”

she commanded, "Let a big black lady stop the show."  She went on to do exactly that. Now Jenkins has resurfaced as Hattie McDaniel.  Jenkins plays McDaniel with conviction and grace, and her best moments, perhaps unsurprising, surface when she embodies McDaniel in song. Naturally bright-eyed and bubbly,

with an enormous smile that reflects the spotlight, Jenkins, as McDaniel, unabashedly glows

when remembering the exultation of a live audience. Her throaty, rangy voice unflinchingly

“Astonishingly talented...[Capathia Jenkin’s] intense commitment to the material allows her to inhabit Hattie.”

Sorkin’s words masterfully capture the ups and downs of McDaniel’s life, and director David Glenn Armstrong calls forth an amazing performance from Jenkins in her first dramatic role.’”

as maids and mammies. An outstanding Capathia Jenkins plays the resilient McDaniel in

Jenkins embraces the role of McDaniel, both physically and emotionally. Her sensual,

soulful rendition of “St. Louis Blues” and other snippets of song had the audience wanting to hear more. Jenkin’s textured performance makes McDaniel’s personal drama as immediate a lesson in history,

race relations and Hollywood culture as you can get.”

“An evocative, informative, insightful examination [of the life of Hattie McDaniel.]

It's the best thing I've seen in quite a while.”