A Monodrama for Contralto and Percussion 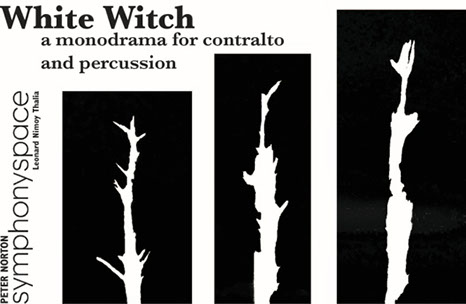 White Witch is a tale of lust, murder and retribution, based on the 19th-century Jamaican legend of Annie Palmer, notoriously known as "The White Witch of Rose Hall." As Annie plans her latest murder of a young rival in a voodoo ceremony, she recounts how she has used her power of voodoo to kill three husbands and countess slave lovers to satisfy her insatiable sexual appetite. Yet despite her prowess and bravado, in the end when regret is too late, she receives her just reward.

The opera is a cautionary tale about the abuse of power, in this case, woman dominating man, white dominating black, father dominating daughter, all by the perverse use of sexuality. The exploitation of the weak, the minority and the powerless is a theme that continues to resonate today.

At the beginning of the opera, Annie appears in the moonlight in the garden of her plantation, amid her voodoo totems to prepare herself to the young girl Giselle whose slave husband Henry Taylor is her current lover. As she undergoes the voodoo ritual of calling to the chief voodoo god Papa Legba to give her strength and become an instrument of his power, Annie remembers her previous conquests. First she murdered her first husband John Palmer, the weak, impotent master of Rose Hall, then her second husband Antoine, her ardent slave lover whom she dispatched because he was socially beneath her class, then her third husband Clarence Hutchins, a fraud and imposter, as well as a host of other slave lovers from the plantation. As she continues to prepare for the death of Giselle, Annie recalls how she learned the sacred arts of voodoo from her island nursemaid Marie Toussaint in Haiti. She also remembers with bitterness the sexual abuse by her own father and how her mother stood by and let it happen, and how the sacred arts were her only salvation. With these charms she casts a spell, a curse upon Giselle.

Annie goes from the lusty highs of empowerment to the stark lows of loneliness when her reverie is interrupted by three calls of the raven. She realizes that Papa Legba has abandoned her for her abuse of her voodoo powers and that he will empower the slave Takoo, grandfather of Giselle and one of Annie’s former lovers, who will kill her using his own voodoo charms. As her impending death looms ahead, Annie becomes circumspect, recalling her unhappy past. Only then does she show regret and acknowledges her own human frailty. In true operatic fashion, Annie faces her fate stoically. With regal bearing she leaves the sacred voodoo circle with her head held high.

“This piece is fierce and intense—and at all times understandable.

I hope it sprouts huge wings and flies everywhere.”

“White Witch is called a monodrama for contralto and percussion, but I would call

White Witch a ‘triodrama’ because the contralto, score for percussion, and animated screen work so well together on the stage to bring the tragic story of Annie Palmer to life.”

“A memorable, unusual and exciting production…

I admire the creativity of the entire team, especially the librettist.”

“Staging was beautiful! The video component populated the state

without distracting from the performance and gave Christina a moving,

George Crumb-but not in a derivative way-in a good way.”

“Production values were great-everything worked together to serve the piece.

The costuming was especially effective in showing us the character.”

“The libretto is beautiful!”

“What an extraordinary piece of music theater! I was absolutely spellbound!”

“Unusual and exciting production---I admire the creativity of the entire team!”